Our Directors were delighted to host Carwyn Jones AM, First Minister of Wales, the press and many industry peers and colleagues on Friday as they officially opened our fourth Anaerobic Digestion Facility in Bridgend, South Wales. 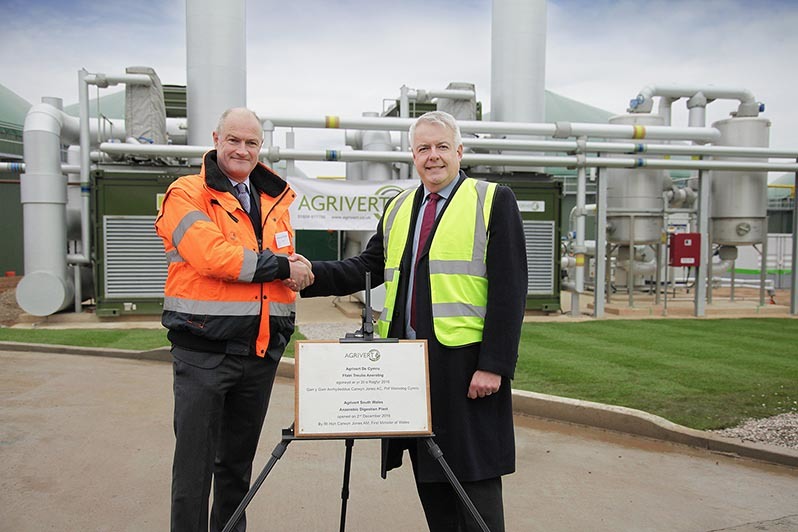 View this video for a snapshot of the day

The plant is the largest of its kind in Wales and is set to process around 48,000 tonnes of organic waste per year. Generating 3MW of electricity; enough to supply over 5,900 homes, and producing a rich bio-fertiliser that can displace fossil fuel derived fertilisers on over 3,000 acres of local farm land.

Mr Jones was among some 50 local dignitaries at the launch which included a tour of a plant that has taken eight months to build on a site already known for its pioneering approach to environmentally-friendly production. Once an aerodrome in the Second World War, Parc Stormy has since 2007 been transformed from a rundown brownfield site into a cluster of interconnected renewable technologies.

The arrival of Agrivert adds to the mix of green technologies already in place including a wind turbine, a field of solar panels, an eco-house and a plant that converts industrial waste into low-carbon cement. There are plans to add a second wind turbine, a pioneering 10MW Battery Storage project as well as a Hydrogen Refuelling Station.

Speaking at the opening ceremony, Agrivert chief executive Alexander Maddan, said: “We are proud of this AD project and the increased accessibility to our industry-leading food waste recycling services it brings. The new plant will offer much needed reliable capacity to local markets and we are pleased that large volumes of waste are already coming in from local sources. Local plants such as this reduce the cost of waste collection and treatment and should provide an incentive for many businesses to recycle food waste. We are delighted to be working with Ceredigion, Powys and Pembrokeshire Councils, who have been supportive partners at every step. Indeed we could not have delivered this facility so quickly if we had not had such a progressive relationship.”

Bridgend AM Carwyn Jones said, “I welcome Agrivert’s investment in my constituency and I was very pleased to officially open their new Anaerobic Digestion plant, the largest in Wales, at Parc Stormy, Stormy Down. The presence of this facility within my constituency will bring a number of benefits. By segregating food from general waste, large tonnages will avoid landfill, where it would generate greenhouse gas emissions. This facility is expected to process around 48,000 tonnes of organic waste per year and will generate electricity that will be exported to the National Grid.”